Welp.  It lasted 8 years folks, but the damn Wilpons have done it again.  They finally broke Sandy, this time it seems for good.  The-what may be-former GM of the Mets announced today that he will be taking a leave of absence to battle a 2nd round of that bastard cancer.  It will be an immediate and indefinite leave, and Sandy left us Met fans with this, when asked if he would return:

“If I were to look at it on the merits, I’m not sure coming back is warranted,” Alderson said. “I will not have decision-making authority moving forward.”

Thus leaving us with the sucktastic trio of Assistant GM John Ricco and special assistants J.P. Ricciardi and Omar Minaya to split the role in Alderson’s absence.

First and foremost, I want to say that I wish Sandy NOTHING but the speediest and best of recoveries.  Cancer is a son of a bitch and Mr. Alderson is a tough Marine that I am rooting for.  May you kick Cancer’s ass a second time sir!

The second thing I want to get to is what was said by the stone-faced Jeff Wilpon, who looked on while an emotional Sandy Alderson spilled his heart out to the media and basically fell on the sword for the MESS that is the Mets right now. Can you seriously say that Jeff Wilpon gives a SHIT about his long-time GM who basically shepherded this franchise through the disastrous years after the Madoff scandal? At a time where the Wilpons refused to put money into the ball club.  Sandy was getting choked up over every word, and there you have dumbass Jeff, sitting there not showing one damn emotion.

Then he hits us with this GEM of a statement, and thus ratting himself out:

Long have Mets fans wondered who was actually making all of these bad decisions.  Who had final say? WHY have things gone so bad all of this time? Well, there you have it folks.  Jeff freakin’ Wilpon has final say on everything Mets. YIKES.

A lot of people wanted Sandy Alderson fired, and are now getting their wish in a MUCH darker and quicker fashion.  In comes Ricco, Ricciardi, and Omar Minaya (yes, that Omar Minaya who the Wilpons pinned the last Mets debacle on) to save the day.  It’s like they say, “The grass is not always greener on the other side”.

Ohhhh boy.  This is who we got making, what will most certainly be, the most important decisions facing this franchise this decade?  I’m not even sure I can spin this one folks.  I have been one of the truthers out there that thought this franchise was always going to be screwed as long as the slimy Wilpons were running the show, and Jeff comes out and gives that thought validation.  Makes me feel good that my suspicions were right, but at the same time, it feels soo damn wrong to be right about that.

All I can say is, Godspeed to Sandy one more time, and may he have a quick recovery.  To Met fans?  In the words of the great Samuel L. Jackson….. 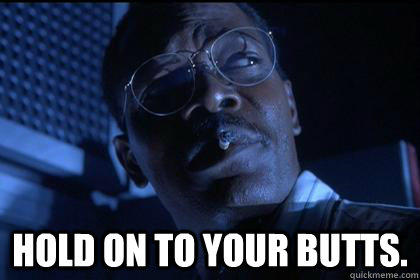